The big rise in heroin and other opioid drug poisonings that the ONS reported last year has been real focus of concern amongst service providers, policy makers and anyone who cares about the lives of vulnerable people.

But new research from the University of Manchester suggests that while overdoses in opioid users remains the largest cause of death (43%) there are other causes which providers, commissioners and policy makers need to be conscious of particularly amongst older drug users.


“It is apparent that older users of opioids are one of the most vulnerable groups in society.”

Looking at the paper it’s easy to see why. 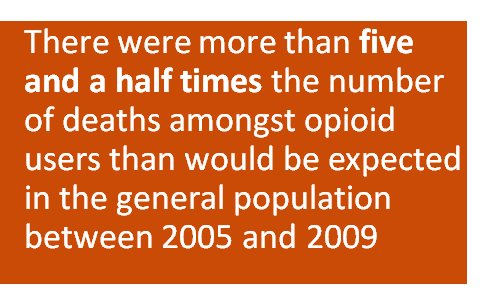 The researchers have examined data on 198,247 individuals over 541,891 person years between April, 2005 and March, 2009 and find that there were more than five and a half times the number of deaths amongst opioid users than would be expected in the general population.

Their research suggests that older users are much more vulnerable to both overdose and a number of other diseases than both the general population and their younger peers.

This research makes clear that 15% of the deaths not categorised as drug-related poisonings were caused by liver disease. The majority were alcoholic liver disease (72%) where the opioid users were 7 times more likely to be affected by the disease than the general population.

Fibrosis and cirrhosis of the liver was also a significant factor in the deaths observed in the study (19% of liver disease deaths amongst the cohort).  The researchers found that the chances of being affected by this increased dramatically amongst older opioid users.  Younger users (18-34 years) were just under three times more likely to die of fibrosis and cirrhosis of the liver as the general population, but this rose to 6 times for the 35 to 44 year olds, and then to 14 times for the 45-64 year old opioid users captured in the data sets examined by the researchers.


There is increasing focus on smoking related diseases by substance use services – for example Turning Point worked with Public Health England on smoking cessation pilots in six of their services last year.  The data from the Manchester University research suggests that there are higher rates of death amongst opioid users as a result of circulatory system diseases (3.1 times higher), respiratory system problems (8.9 times higher), and cancer (1.8 times higher), which makes this focus an imperative. 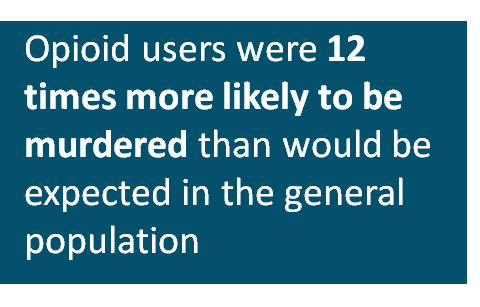 Worryingly the research found that rates of homicide were 12 times higher in opioid users than in the general population, and that was markedly higher amongst older opioid users.

The rate of homicides in the United Kingdom during the period of the study was 1 per 100,000 of population.  Younger users (18-34 years) were more than 8 times as likely to be murdered; those between 35 and 44 more than 15 times; and for those between 45 and 64, they were a staggering 27 times more likely to be murdered than the general population.

Suicide rates were also much higher than might be expected with rates of between three and four and a half times higher than the general population.

This is a space for the expression of comment and opinion, as well as the dissemination of information, about developments relating to the drug and alcohol sector. From time to time, DrugScope may publish guest posts. The views, opinions and positions expressed within these guest posts are those of the author and do not necessarily represent those of DrugScope.